Solar systems are an important alternative energy source and offer power solutions for many applications. This is all well and good when the sun shines, but what about those cloudy days? Which solar panels work best for overcast skies and low-light conditions?

We will address the following questions about solar panels and low light conditions.

Cloudy days impact the performance of solar panels because of the limited amount of direct sunlight available to generate power in the PV cells. Solar panels can generate power on cloudy days, but the power output will be reduced, and some solar panels function better than others in these conditions!

What Solar Panels Are Best For Cloudy Days?

Solar panels are made from many solar cells, called photovoltaic cells or PV cells. The materials that the PV cells are manufactured from vary in efficiency and sensitivity to light.

With the current photovoltaic technology, there are essentially 3 main types of solar panels.

Even though these conditions adversely affect solar cell technology’s performance, some technologies handle it better than others.

The three technologies differ in manufacturing technique and quality of silicon used. This separates each of the 3 technologies on levels of efficiency, sensitivity to light, size, and cost.

Here’s a selection of three solar panels that will be great for your climate; 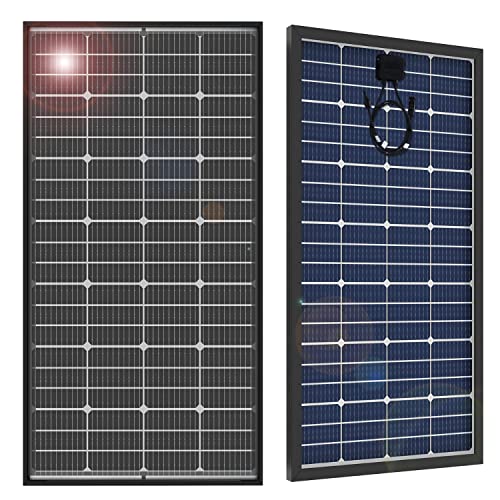 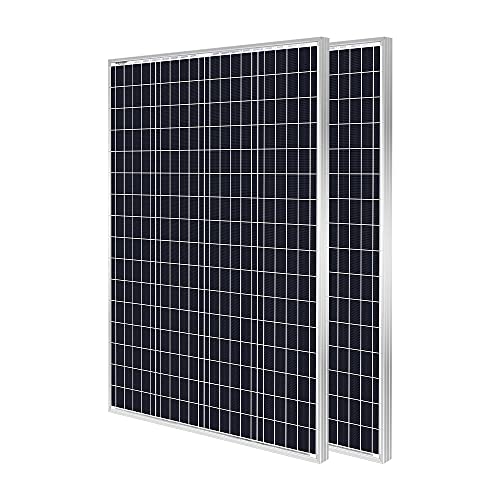 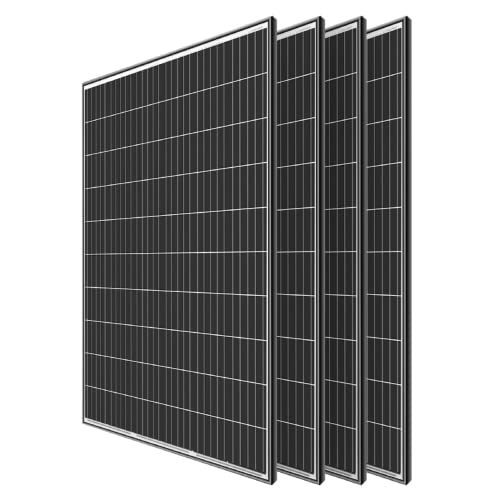 Monocrystalline PV cells are made from a higher quality grade of silicon, and the crystals grown for use in the PV cell are formed from a single crystal.

The single crystal allows electrons to flow more freely and easily through the single-crystal structure than other solar PV technologies. The flow of electrons through the crystals equates to electricity production.

The ease at which the electrons can flow through this single-crystal structure makes monocrystalline solar panels more efficient in general than the other technologies.

It also makes the monocrystalline panels more sensitive in low light conditions and performs higher than other technology panels in low light.

This space advantage allows more power to be generated on your roof using monocrystalline solar panels. The main downside to these panels is the cost. The manufacturing process is more complex, and higher quality silicon is used to produce the crystals.

Monocrystalline solar panels are less affected by heat and have a longer lifespan than other solar panel technologies.

You know a solar panel is well made when it can withstand 6000 pa of pressure. Snow loads for any region will be fine for these panels.

One thing to be mindful of is how it will perform in years to come. This is where their build quality comes into play – they are made for commercial projects with anticorrosion and waterproofing.

Not only do they produce and perform, but they also look at the part with their modern design.

How Do Polycrystalline Solar Panels Perform On Cloudy Days?

Polycrystalline solar cells use a multi-crystal construction, with the resulting cells having many crystalline structures. The electrons cannot move as freely through these structures, limiting the electricity generation capability of these PV cells.

The resistance to the passage of the electrons, coupled with the lower quality silicon used in constructing these panels, makes them less efficient than monocrystalline panels.

The poly cells are also not as sensitive to light, which reduces their capacity to produce electricity in low-light or diffused light conditions such as cloudy days.

The lower efficiency of the poly cells means that more cells are required to produce the same amount of electricity as mono cells. This results in larger polycrystalline panels taking up more space than monocrystalline panels.

The main advantage of poly cells and panels is that they are cheaper to manufacture than monocrystalline cells. Polycrystalline panels are generally only suitable for smaller solar installations or where space is not an issue.

How Do Amorphous Solar Panels Perform On Cloudy Days?

Thin-film solar panels or amorphous solar panels are the least efficient of all the solar panel types. These panels do not perform well on cloudy days and require as much direct sunlight as possible to perform optimally.

Amorphous solar panels can be made from various photovoltaic substances, some of which are not silicon-based. These substances are then bonded to a base substrate such as glass.

Amorphous solar cells can be made from the following photovoltaic material.

The main advantage of amorphous solar panels is that they are flexible. This makes for easy installation if the surface is not flat, such as the curved roof of a camper van.

Amorphous solar panels are the cheapest of all the solar panel types, but the materials used in their manufacture are not very efficient in converting light to energy.

The application of these solar panels is usually reserved for camping applications and smaller power requirement applications such as solar mobile phone chargers.

How Much Performance Do Solar Panels Lose On Cloudy Days?

The amount of performance that solar panels lose on cloudy days will depend on the thickness of the cloud layer, whether precipitation accompanies the clouds or not, and the efficiency of the solar panels.

Thin cloud layers will allow more sunlight to filter through the clouds and have the least effect on your solar panel’s production loss.

A thick cloud cover will diminish the sunlight more dramatically, degrading the solar panel’s performance to a greater extent.

Rain and snow can further diffuse the already low light and result in a greater reduction in the performance of your solar panels for the duration of the precipitation. One advantage of a rain shower for your solar panels is that it will clear off any dust accumulated on the panel, improving the panel’s efficiency when the sun shines again!

The higher your solar panel efficiency, the less you will notice a drop in the panels’ productivity. This is why it is important to use monocrystalline solar panels if you regularly experience cloudy or overcast conditions.

Cloudy days and rainy days will result in inconsistent electricity production by your solar panels. As the clouds move, thin out, or become thicker, more or less light will filter through to reach the solar panels. There will be many more peaks and lows in the energy production from your panels during these days.

Tip: If you experience frequent cloud cover, you can compensate for the power loss by adding several extra panels to your solar installation.

Can Solar Panels Produce Power In Other Low Light Conditions?

Low light conditions such as mist, fog, dusk, dawn, and shade or partial shade conditions will effectively lower a solar panel’s energy production. The degree of performance degradation of the panels will depend on how much light is blocked from the panel surface.

See also  Do Solar Lights Need Direct Sunlight? (Do This ...)

Direct sunlight is the most beneficial condition for optimal production by your solar panels, but other low-light conditions may affect the panel’s performance.

Anytime that full, direct sunlight is not available, the performance of the solar panels will be reduced. The hours of dusk and dawn will result in panels producing power, but only at a limited capacity due to the low light levels.

Mist and fog can persist into mid-morning on cooler days and have the same effect on your solar panels as a cloudy day. The effect of the drop in performance will depend on the mist’s thickness.

Shade and partial shade falling over the surface of the solar panels can result in a drop in the production of your solar panels. This is most often caused by trees that grow over time and begin to shade your solar panels at certain periods of the day.

You may not even be aware of this problem since the solar panels may have been installed when the trees were small enough not to cause a problem.

Shade over the panel will not stop it from producing electricity completely since the panel will receive ambient or reflected light, but the panel’s output will be reduced.

How Much Sun Do Solar Panels Need?

In ideal conditions, your solar panels should receive a minimum of 4 to 5 hours of direct sunlight each day to maximize electricity production and charge the batteries.

The ideal sunlight conditions to maximize the production of your solar panels is between 4 and 5 hours of direct sunlight. The best time to have this direct sunlight would be between 10:00 am and 3:00 pm, when the sun has the highest elevation in the sky.

If the sky is clouded during these peak sunlight hours and you only get intermittent sunshine, the output of the solar panels will not be affected too badly. If the sun peeks out from behind the clouds periodically, it will boost the production of the panels.

If you have total cloud cover during the peak sunlight hours, and the sun only makes an appearance in the early morning or late afternoon, the production of the solar panels will be greatly reduced.

The moon has no means of generating any light of its own, so the bright full moon we see is simply light reflected from the sun.

This reflected light has very little energy, which means that the solar panel cannot produce much electricity from moonlight, even a bright moon on a cloudless night.

The output of a solar panel from a bright moon will be less than 1% of its normal output capacity. So, if your solar panel can put out 100-Watts on a sunny day in the moonlight, it will generate less than 1-Watt.

This is not enough energy to power an LED light bulb, and will be no benefit for charging your solar batteries.

Suppose a bright, full moon only generates less than 1% of your panel’s output. In that case, any other moon cycles will generate even less electricity, making moonlight unsuitable for producing power from solar panels.

Similarly, starlight on a cloudless night does not produce enough energy to produce any energy at all from solar panels.

However, research is currently underway to develop solar panels that will use ambient light at night from the moon, stars, and light from surrounding city lights to generate electricity. So while night-time electricity is not currently available, it may become an option shortly!