To reduce the voltage on a solar panel, there are a couple of ways to answer that question. If you are asking about reducing the voltage from a solar panel as it functions, the answer is an easy fix.

If you ask how to draw down the voltage in a solar panel that is not working, the answer is different but also easy.

There are situations where you would want to reduce the output (voltage) of a solar panel, such as reducing a 12-volt panel to work on a 6-volt battery.

In this blog, we discuss:

There is also the situation where a panel needs maintenance or repair, and to do so safely, the panel must discharge much of the energy stored in it. Those are two different situations, and we will go through both.

Contents show
1 1. How do solar panels reduce voltage?
2 2. How many volts should my solar panel produce?
3 3. How Many Volts Does a 200 Watt Solar Panel Produce?
4 4. What Is the Minimum Voltage of a Solar Panel?
5 5. So How Do You Reduce the Voltage from a Solar Panel?
5.1 Connect the panel to something that requires charging;
5.2 Install a step-down converter;

1. How do solar panels reduce voltage?

The easiest and safest way to reduce the voltage from a solar panel that is operating is to connect it to a step-down converter. These are also known as Buck Converters.

Solar panels produce energy in DC format. The converter is not inverting the power, simply reducing the number of volts reaching the battery.

If you needed to reduce the solar panel’s power for maintenance, you would not use a converter. 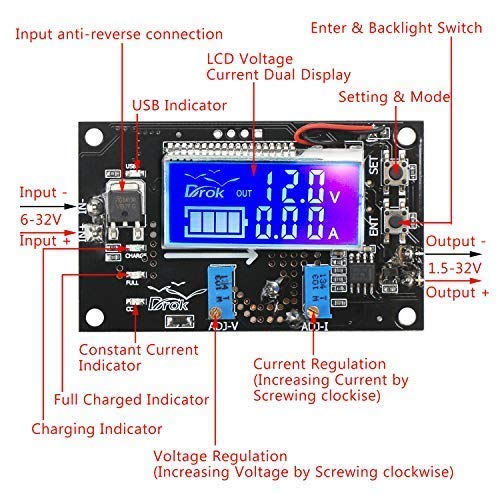 The effect is similar to leaving the lights on in your car. The lights continue to burn even though there is not a power source charging the car’s battery.

Eventually, the battery goes dead. When you connect a single solar panel to a lead-acid battery, the battery acts like the lights in the car and will use all the energy in the panel until there is no more.

It is important to note that you are still dealing with electricity, and safety should always be the first step in any solar panel project.

2. How many volts should my solar panel produce?

Do you need to know how many volts a solar panel can produce? A solar panel is not a single unit. It is many smaller units that work together.

The size is not the physical size of the panel, though there is that also. The size is the number of photovoltaic cells contained within the panel.

Generally, the volts your solar panels produce include:

Each cell produces about .47 volts. As technology improves, so will the number of volts produced by a photovoltaic cell.

If you are trying to reduce the voltage from a solar panel to match a gadget, such as going from a 22-volt panel to a 5-volt cell phone, you will do better to replace the panel with one that matched the device.

While a step-down converter would also work, reducing the voltage from too high to too low is a bit of overkill.

3. How Many Volts Does a 200 Watt Solar Panel Produce?

A 200-watt solar panel produces 18 volts of energy, which is an ideal solar panel size for charging a 12-volt battery or to power a device that is also 12 volts.

If you need a solar panel that produced 24 volts, it would be in the 300-watt range. There is a difference in measurement between an open and closed circuit.

It would likely take longer in the real world because of the ebb and flow of energy produced by a solar panel throughout the day.

As the day progresses, the sunlight gets more substantial and then begins to fade.

4. What Is the Minimum Voltage of a Solar Panel?

If you want to measure the minimum voltage of a solar panel, it gets a bit tricky. Why so tricky? Well, many things impact how much energy a solar panel can make. Those include:

There is also the measurement of what a volt is compared to amps and watts, which changes based on how many amps you put into the equation.

The volts also drop when you add a controller or reducer into the mix. How low is too low? You never want the voltage to drop below the rating of the batter.

A 5-volt solar panel will not charge a 6-volt battery. There will not be enough energy to charge the battery fully.

Thankfully, there is a calculator for converting watts to volts to amps:

5. So How Do You Reduce the Voltage from a Solar Panel?

There are two ways to reduce the voltage from a solar panel. Those are:

Connect the panel to something that requires charging;

A lead-acid battery will take the energy from the solar panel, leaving it depleted so long as the panel is not in the sun.

Under this example, you are literally removing the voltage from the solar panel.

Which would block a portion of the energy from the solar panel, thus reducing the voltage. The situation involved here occurs when you have a solar panel that produces more voltage than the battery can handle safely.

A regulator acts like a switch that shuts off the flower of energy when the battery is approaching the fully charged level.

These components help to extend the life of the battery and help to prevent overheating due to overcharging.

In some cases, replacing the solar panel with one that matches the battery is much simpler. However, it would help if you always used a solar regulator to prevent overcharging and damage to the battery or device.

How do you set up a solar panel?

When it comes to solar panel installation, there are several ways of doing it. You can do it yourself or hire a contractor to do the installation for you. Solar panels can be mounted on your roof with a specialized mounting system, or on the floor with a safe, specially-made rack.

Some users even have mechanized solar mounting systems, where their solar panels are on a motorized stand that slowly follows the sun as it moves through the sky.

Can you install solar panels yourself?

Definitely! Of course, this depends on the complexity of your setup, though. If you are setting up a relatively low-power, smaller solar system, DIY is certainly an option.

If you’re setting up a larger, grid-tied system of over several thousand watts, the installation can become somewhat complex, and it may be a better option to bring in a professional.

The biggest hurdle is the wiring, especially in a grid-tied, high-power system. Dealing with electrical connections can be dangerous, and any short circuits can quickly cause fires, so it’s important to know what you’re doing or get a qualified electrician to help you.

How to clean solar panels?

In order to maximize efficiency, it’s helpful to clean your panels regularly. Dust and grime collect up quickly on these large surfaces, which can reduce the panel’s ability to harness the power of the sun.

You’ll need to wipe them down gently with a cloth or even a soft broom every few months and a mild soap and water solution, especially during periods where there is not a lot of rain.

If you live in an area with regular rain, a good clean once every six months is plenty.

How to connect solar panels?

Connecting your panels in series will boost the voltage, which you’ll only need to do if you’re trying to meet the voltage requirements of your inverter or batteries.