There are several important factors to consider when putting together a home solar system, from the type of panels to choose to the power output you require in your home, but the batteries you choose are arguably the most important factor.

This is because your battery, or batteries, will dictate just how much power you can store, and even the biggest solar panel will be under-utilized if your batteries are not big enough to store the incoming power.

There are several types of batteries to choose from for a solar setup, and lithium-ion batteries in particular have been making a lot of waves in recent years.

But can you charge a lithium battery with a solar panel?

In this article, we’ll be covering the following:

If you are considering using a lithium-ion battery for your home solar setup, you’ve come to the right place!

How to charge a lithium battery with a solar panel

While lithium batteries can certainly be charged with regular solar panels, a solar charge controller, or regulator, is required — no matter the type of battery you choose.

There are two basic types of controllers to choose from;

PWM controllers are far less expensive, but also less efficient, and so using an MPPT controller for a lithium battery is highly recommended.

There is one important factor to consider, though, no matter the charge controller you choose to use. On most charge controllers there will typically be a specific charge profile setting you can select depending on your battery.

Ideally, you’ll want to get a charge controller with a profile made specifically for lithium batteries.

Only a select few of the controllers on the market today have settings specifically for lithium batteries, unfortunately, but the profile used for lead-acid batteries can sometimes do the trick.

There are some downsides to this, however, as a lead-acid profile may not charge a lithium battery to a full 100%, usually reaching around 95% at best.

Also, lead-acid profiles have a built-in “float stage” at the end of the charging cycle, designed to trickle charge an FLA to compensate for self-discharge.

Lithium batteries self-discharge at a very low rate and do not need this float stage, and this setting may reduce the life of your battery.

The workaround to both these issues is to disconnect your battery from the charger when it’s not being used, but a charge controller designed for use with lithium batteries is the best bet. 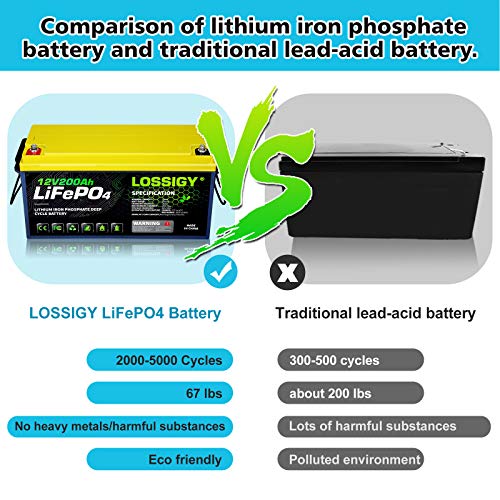 See the example above from Amazon

Why use lithium-ion batteries for solar panels?

Lithium-ion batteries are most well-known for their use in cellphones and electric vehicles(EV), but there has been a recent explosion of popularity of lithium batteries in the solar world, not least due to EV manufacturer Tesla and its Powerwall battery pack.

Flooded lead-acid (FLA) batteries have long been the standard for home solar use, and for the most part still are, due to their low cost.

However, these batteries require maintenance, need adequate venting, and have a far shorter lifespan than lithium batteries.

While lithium batteries cost more initially, they are superior to FLA batteries in several important ways, including:

Most battery manufactures have a recommended “depth of discharge,” or DoD, which is the amount of stored energy left in the battery before it needs recharging.

It is vital to maintain the recommended DoD in order to keep the battery healthy and functioning properly.

Typically, a lead-acid battery has a DoD of 50%, meaning you can only use 50% of the battery’s capacity before it requires recharging.

Because lithium batteries are deep-cycle batteries, their DoD is typically around 95%, so you can use the capacity of the battery to almost its full extent before needing to recharge.

Due to their higher DoD, lithium batteries do not need to be charged as often, resulting in a far longer lifespan than FLA batteries.

Most good-quality lithium batteries have a lifespan of around 10 years or 10,000 cycles — whichever comes first — whereas FLA batteries will typically last around four to five years, or 500-1,200 cycles depending on the quality.

Yes, you read that right — lithium batteries have almost double the lifespan!

This will always be lower, as no battery is 100% efficient, but lithium batteries are about as close as it gets with an average efficiency rating of around 90%, whereas FLA batteries are roughly 70-85% at best.

Little to no maintenance

FLA batteries need to be checked and refilled with distilled water every 1–2 months, or as needed, in order to maintain their health and make sure they are working correctly (unless they are sealed lead-acid batteries).

They also need to be in a well-ventilated area to allow the battery gases to escape.

FLA batteries are large, bulky, and heavy, and take up a lot of space relative to the power they can provide.

Lithium batteries have the highest energy density of any battery on the market, meaning they can hold far more energy relative to their size compared to FLA batteries.

The only real downside to lithium batteries is their substantial up-front cost, plus their potential fire hazard.

You’ll be glad to know that although they are expensive, they will last far longer than any other battery type on the market, and as long as they are properly installed, the risk of fire is tiny.

Lithium-ion batteries can most certainly be charged with a solar panel, and in fact, are superior to any other battery on the market for home solar setups.

While they may be expensive, they are far more efficient, have a much higher energy density, require very little maintenance, and have almost double the lifespan of a lead-acid battery.

While they are certainly far more expensive than lead-acid battery types, lithium-ion batteries are certainly the longest-lasting, lightest, and most efficient choice for solar applications.

Of course, your batteries will need to be properly looked after and maintained to give them the longest possible lifespan.

The cost of solar batteries depends on the type you choose for your system, but you can expect to pay roughly $400 per kWh on the low end, and $750 per kWh on the high end.

Lithium-ion batteries are by far the most expensive but have more than double the life expectancy of other battery types.